Oh, my aching heart. Today was my youngest's first school visit day. For all you non Kiwis, in NZ, children start school on their fifth birthday, so for 4 weeks prior to that, they have school visits. My boy will be at school for two hours every Tuesday until he starts on his birthday. "I'm so excited!" he said, as walked through the gates, "But I think I'm feeling a little bit scared!" Nervousness aside, he is ready. I thought I was ready. I have learned this morning, that I am not.

Having been through first days with my now 14 year old daughter and 9 year old son, you'd think I'd be a pro at this. I started having kids before my friends, so I remember a lot of them confiding in me during their second pregnancies, that they worried they wouldn't have enough love to give to the baby. That there wasn't enough room in their heart to love their second child as much as their first. But that's not true. Our hearts merely expand with more love, scoots over to give more to the next child. That's true in every aspect for me except when it comes to feeling like I know what the hell I'm doing. Sure, we've been through it all with our teenager, but it doesn't make the boys' high fevers, first days of school, first fight with friends, first bloody knees - any easier. At least not for me. Each child really is different. Each experience is different, and the deeper I go into this motherhood journey (fourteen years!?) the more I realize that I have so much to learn. Just when I think I've seen it all and know just how to deal with any situation, something comes along to remind me that I'm a novice.

He is just so little. He is so earnest, so innocent, so trusting. He is putting himself and his little heart out there, trying to fit in with the other children. He can barely reach the hook to hang his backpack. I had to just watch and let him figure it out. His school uniform, in the smallest size available, seems to be swallowing him up. The pencil looks so big in his hand. These were all the thoughts swimming around in my head this morning. I thought I was ready. I am not. He's been in daycare since he was 8 months old, so we're used to being apart while I work part time, but this is different. This is school. All of my children will be in school. The hubs and my chapter of paying a nice portion of my paycheque to childcare is coming to a close after all these years. Well, that's one thing I am ready for.

This was only the first visit and it affected me in a way I hadn't expected. Three more to go before it's official. I should be ready by then. 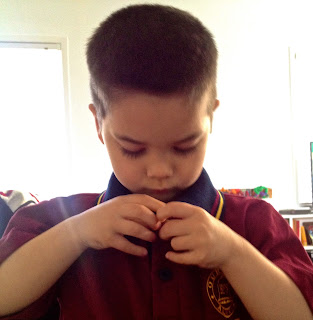 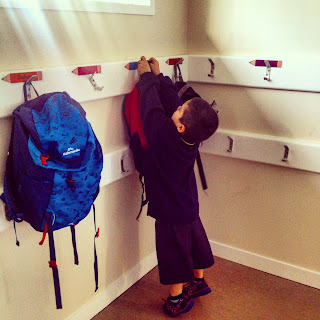 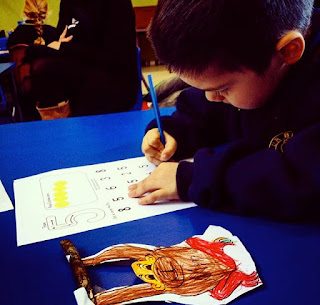 It's now official. Three more visits came and went. He became more and more ready. I became more and more emotional. I'd been checking in with my husband during the entire process as my boy and I went through it. He'd listened, but I don't think it had hit him, hit him just yet. Kind of like how as women, the idea of a baby is very real to us as they grow in our bodies, but it doesn't hit Dad until the baby is out and in his arms.

So this morning, on our boy's fifth birthday and first day of school, I had him take the morning off work so that we could walk through this doorway for the last time together. We watched as our little one carefully put his uniform on. We physically stopped ourselves from coming to his aid as he struggled putting his shoes on over the socks that are too big for his little feet. We walked with him to school, watched him hang his bag up, on his tippy toes. We followed him while he walked in a line with his class, to the morning assembly to be introduced to the other students in the junior syndicate.

We walked back with the class to their room and watched them sit for their morning mat time. We blew him a kiss and wished him luck for his big special day. He grinned and waved. Just an ordinary wave for him, but such a big, symbolic one for us.

We turned away with tears in our eyes and walked to our cars to head off to work for the day.

Our boy was ready. We were not.

The longer I am a parent, the more I understand that my children are here to teach me how to parent. There I was, always thinking I was supposed to be teaching them but it's the other way around.

It's me that needs to keep up and be ready, because they always are.