Nearly Coming Out On the Other Side

When I was 26 years old, most of my friends were travelling the world, going to concerts, shopping for fabulous clothes, dating up a storm, sleeping around and partying. A lot. I was married and having a baby. I was the only one in my circle of friends having a baby. I felt very out of the loop and often felt like those fun, carefree days were over for me. Forever. 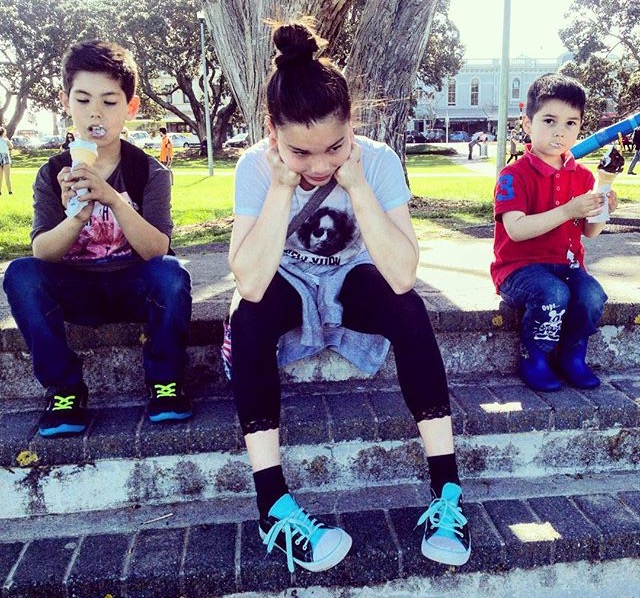 But now, as many of my friends are just getting started, having their first babies, I am a mother of a 5, 10 and 15 year old, and I've recently recognised myself as a Nearly Coming Out On the Other Side Mum.

Oh sure, I know, I still have a 5 year old who loves to poo in unknown, usually filthy toilets at the most inopportune times, but in relation to the 10 and 15 year olds, I'm rockin' a pretty good balance. And yes, I'm having to dodge and deflect a great deal of teenage sass and attitude, but we can't have everything going for us all at the same time, can we?

Here are some things that you, too, will have the delight of savouring once you find yourself approaching the Nearly Coming Out On the Other Side parenthood.

1) PRO: You are now the proud parent of a built in babysitter. Congratulations! You always have someone you can count on to watch the youngers while you pop out - usually on unglamorous excursions like to the supermarket.
CON: Just because one of them is a teenager doesn't mean that they've managed to stop fighting. They will always meet at the youngers' level to hurl a healthy measure of "I hate you!s" and "Shut up!s" mixed in with good ole punchfests just for shits and giggles. You will still get those "Mum, I wasn't doing ANYTHING and she kicked me in the balls!" phone calls. It's okay, it will pass. As one of my favourite Mum friend's chestnut of a saying goes: "No one's going to DIE."

2) PRO: If said babysitter is unavailable, the youngers are now capable of sitting and eating at a restaurant table in a civilised manner without grabbing things, for a limited time. That's the pro.
CON: Youngest of youngers will announce their emergency need to poo just as your hot meal arrives. Every. Damn. Time.

3) PRO: You get a free pass from current Disney obsessions. My only daughter was well past the princess age when "Frozen" came out. So guess what? I have never seen the movie. Not even once! I still know all the words to that cursed song.  I mean, come on, I still do have to go out into society on a daily basis.
CON: You now get a 24/7 stream of Vines and Snapchat shenanigans, where some crackhead's soundbite from the news becomes an autotuned rap or endless FaceSwap filters create the biggest laughs in the whole wide world - don't ask me why.

4) PRO: You don't go through half as much milk or snackfood like Goldfish.
CON: You will bake and it will be ALL GONE within a matter of hours, before you even get to try ONE. (True story, this happened to me just yesterday.)

5) PRO: Your days of Santa/Easter Bunny/Tooth Fairy duties are numbered and you may be down to just doing this for the youngest of your youngers.
CON: The level of presents for the older are now waaaaay more expensive than the little gadgets for the youngers. Apple products ain't cheap, don't ya know - and you can't just say "no" because they're now pretty much mandatory for school assignments and Google Classroom.

6) PRO: You don't need carseats or boosters anymore!
CON: They now want to plug their aforementioned devices into the stereo so that they can dab along to their "music."

7) PRO: You no longer need to spend lots of moolah on daycare bills, diapers, or baby food!
CON: You now get to throw your money at razors, deodorant, sanitary products, and perfume/cologne.

10) PRO: Late at night, when you tuck the teenager in (or more like make sure they're not on their devices) they will sometimes still want a snuggle.
CON: How could there possibly be a CON for this? Not a chance. Take the snuggles while you still can.

I think the main thing I've learned as I get deeper into this motherhood thing is that there is no "better" or "easier." There is just you and how you view and deal with things to make them better or easier for yourself.

These are my words now, we'll see where I'm at as time goes on and the dynamics of the family shift again.

For now, I'll leave you with what I constantly tell myself:

"Assume and expect nothing. Go with the flow and figure it out as you go."

Because as soon as you think you've got it down, it will bite you in the ass.
Posted by Unknown at 5:38 AM No comments:

A Birthday Party By An Unpinteresting Mum

One of the first blog posts I ever wrote was all about what an "unpinteresting" Mum I am. Here's the link if you haven't read it:  http://www.realistickidface.com/2013/12/confessions-of-unpinteresting-mom.html When I wrote that, we were still living in Japan and I was still called Mom - but now, we're in New Zealand and I am Mum. Anyway, I digress.

While I admire all those crafty and organised Mums and Moms out there, I have to say, I am not very strong in either of those departments. We just threw my son his tenth birthday party yesterday, and I have to say, it went well. I was happy with it. I mean, it wasn't perfect, but the kids had a blast and it was easy for us. We had it at Inflatable World, a magical (I am being generous with my adjectives here) place where you can reserve a table for your party and the kids can literally go bounce off the walls for two hours.

First things first, we've thrown parties like this before at bowling alleys and playland type places and one thing I noticed was that kids do not want to tear themselves away from the excitement to sit down for food. I thought about ordering pizzas, or having some sandwiches or something, but knew that the kids would probably randomly swing by, take a bite and toss the rest. Not providing food, of course, is not an option, so I made little snack packs. 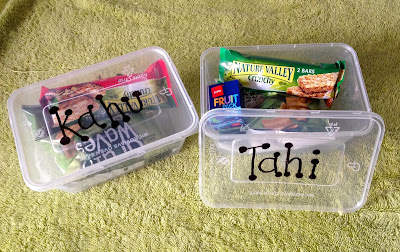 Nothing fancy - I just bought some little containers from the $2 Store (have I told you how much I love the $2 store?) and put snacks in there. I wanted to make it relatively "healthy," so I put raisins, granola bars, Grain Waves and one Chocolate Fish. I know that those things aren't 100% healthy and still contain sugar, but better than packs of m&ms, donuts, fizzy drinks - you get the idea. I wrote the child's name on the lid and that was that. This worked out perfectly - the kids stopped by the table, ate a little snack, had some water and went back to going bonkers in the play area. Half an hour before the end of party time, we did the cake, but the kids wanted to keep playing so they chose the takeaway (takeout, if you're American) option for the cake. By this time, their snack packs were empty - yay, instant takeaway boxes. I can't say that the cakes made it home, though. The kids gobbled their pieces up while waiting for their parents to pick them up. 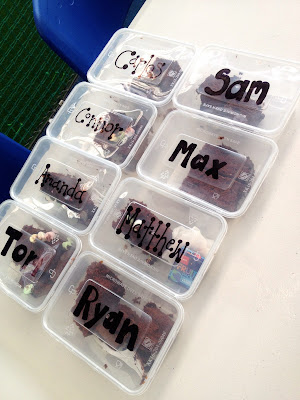 We did have twelve kids to feed at the party and I knew the snack packs wouldn't cut it on their own, so I whipped up these awesome pizza scrolls. Now, I'm no Nigella Lawson or Martha Stewart, okay and I've never attempted to make anything with pastry, thinking it would be too complicated. It's not! These pizza scrolls were so easy to make!
This is everything you need. 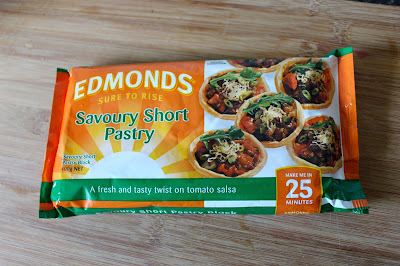 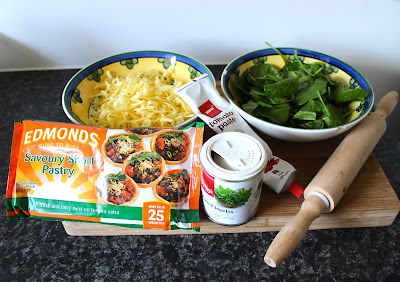 1) Spread some flour over a clean surface. Using a rolling pin, roll the pastry out into a rectangular shape, be careful not to make it too thin. Preheat oven to 200 degrees C, approximately 300 degrees F. 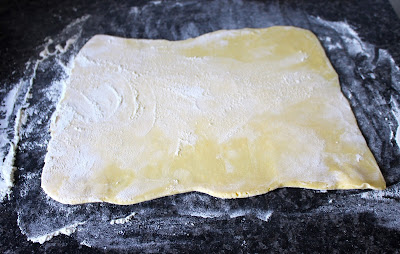 2) Spread an even layer of tomato paste on the pastry, right to the edges. Load it up with toppings of your choice. I kept it simple and only used cheese, mixed herbs and baby spinach leaves. 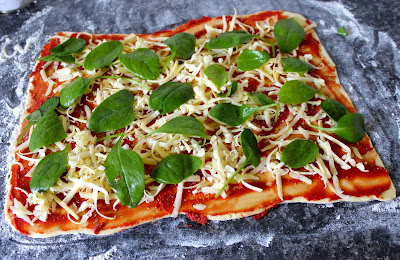 3) Roll the whole thing up evenly, and slice thinly. 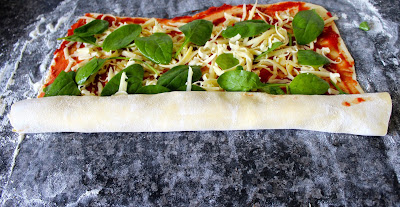 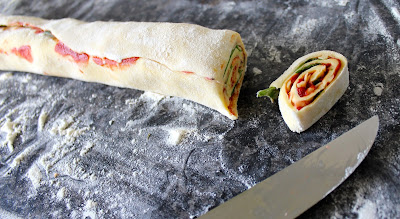 4) Lay slices on an oven tray lined with baking paper, grill for about 10 minutes or so. Check frequently and take them out when it reaches the colour you like. 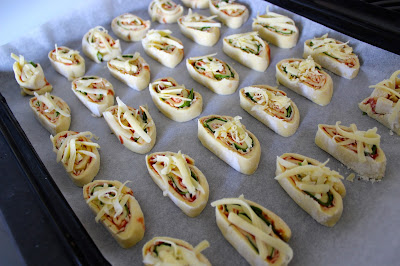 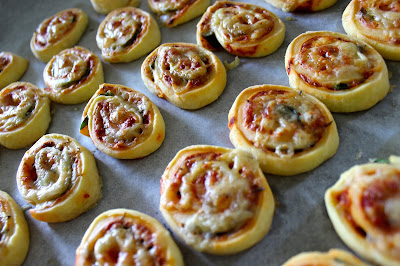 This recipe makes about 30, so I made two batches for the party. They were a total hit!
Now that I know how to make this, I am so going to go nuts with variations - including a sweet version using fruit.

Feel free to comment or send me a PM with suggestions on how to milk this recipe for all it's worth!
Posted by Unknown at 1:06 PM No comments: