Back to School Hell 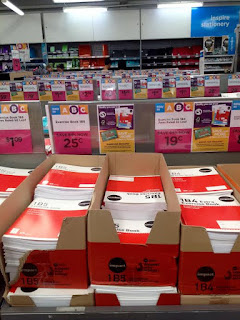 For those of you not living in Australia and New Zealand, your kids have just gone back to school after a nice Christmas break. For those of us in Australia and New Zealand, this is summer break. The kids have been off of school since around mid December and will be starting back up in the last week of January/first week of February. You know what that means. Yes, my favourite outing of all time - fucking school supply shopping. Now, I don't usually like to swear (well, not in writing) but it's completely warranted in this case.

Usually, I order the stationery packs from the school's website and have it delivered. My daughter's high school doesn't offer this luxury, so this year, I decided to bite the bullet and "just pop out and get all three kids' worth. I'm at the store anyway" - how wrong I was.

My teenager loves school, loves new stationery and loves to be organised, so this is actually a fun time for her. Me, on the other hand, not so much. I mean, it'd be fine if it were simple. But NO. The list consists of things like, I shit you not:

You get the idea. And as you can see from the photo, they all look exactly the fucking same. 1E5-14B8-10B5-3B1. Are you kidding me? All I kept thinking about during this hell was that Seinfeld episode where they can't find Kramer's car in the carpark and Jerry suggests that the parking garage sections should be named things like "Your Mother's a Whore" to make it easier to remember and find your car. Same deal here, what is with the crazy letter and number combos on these notebooks? The packed store is full of parents zombie-ing through the aisles mumbling random letters and numbers under their breath. I saw mostly mums - flushed, irate mums, but I did spot a few poor dads that had somehow been suckered into this hellish mission.

My favourite part was hearing all the mothers and their teenagers arguing. One mum looked at me after a lengthy argument with her eye rolling daughter who had just stomped away. I gave her what she needed: "It's hell isn't it? It sucks beyond belief."
"I KNOW. I had a big talk to her before we came and she promised to stick to the list. Now the little bitch is wanting extra things that AREN'T ON THE LIST." the poor woman said, nearly in tears.
"I know, I know. I feel you." was all I could muster, I had my own ongoing battle with my boys to deal with.

Two and half hours later (of course, we needed to hit up another stationery store because the other one didn't have the right sized ruler or some shit) we were done. Thank goodness. It feels so good to know that we are done, and school is still over a week away. This relief and semi-smugness at our organisation and mild "ahead of the game-ness" feeling will be gone soon, I know, I ain't stupid. One of my three will come home soon enough saying *Mum, I lost my scissors/my scientific calculator broke/I snapped my ruler in half." but until that happens, I've done my job.